She certainly tough enough: have you seen her in 'Night On Earth'?

Fabulous movie: five taxi rides in five different cities at the same time, each one unfolding in a different outcome but each one riveting. The Helsinki taxi ride is a panic: funniest sad thing ever.
V

Hell of a rig, this one. It's the set-up of international recording drummer and composer Eric Moore, who's played with a long list of international names on their hit records. He was in Helsinki for a drum clinic for a select few invited players who use the shop, and I went there directly from work, so I was a bit painty and messy in my work gear, but the shop lads were great and seeing as I was early, they let me try the set-up while making some coffee for the staff. 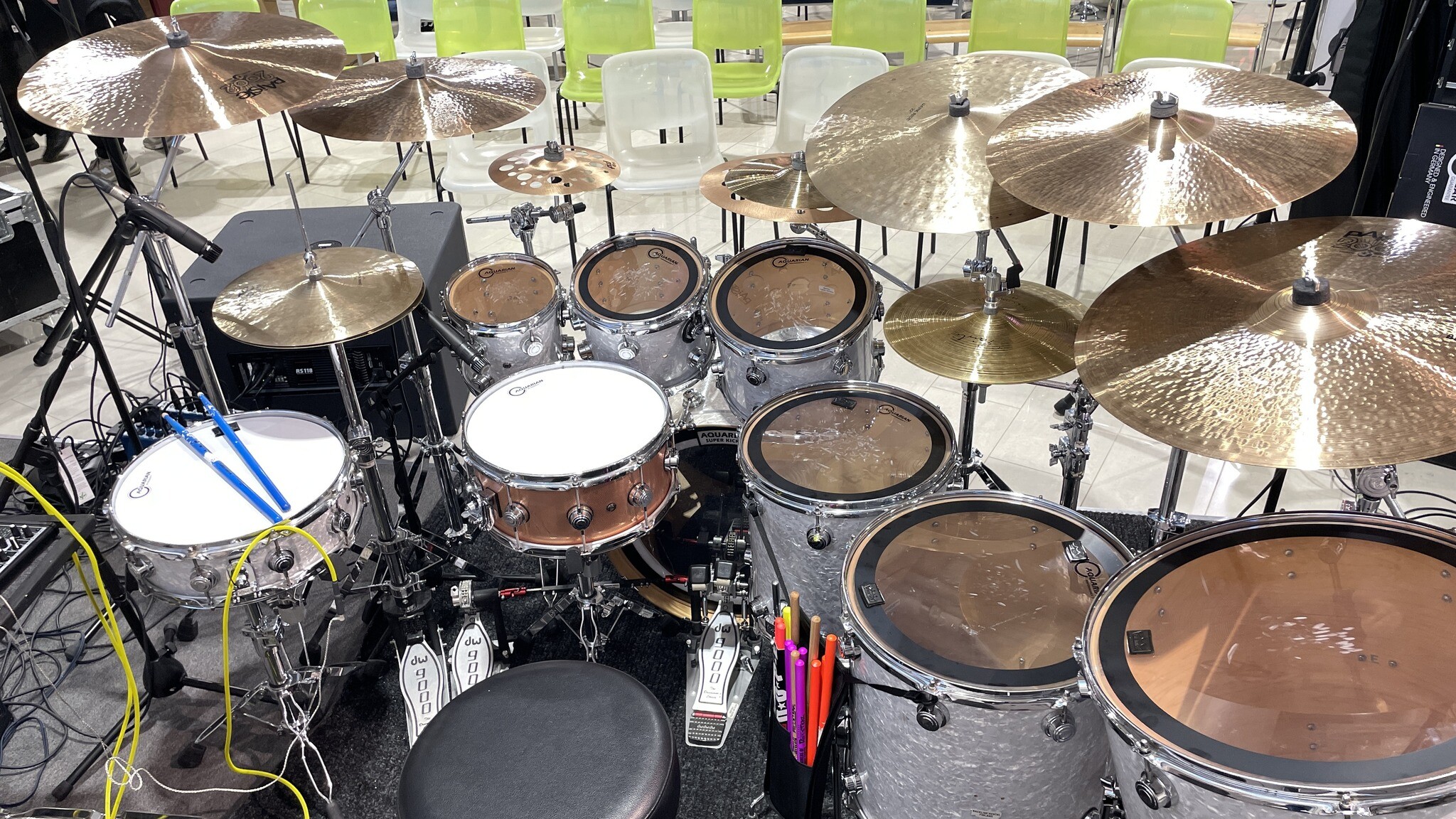 The drums are by DW, Drum Workshop USA, and are all hand finished maple shell drums with a rack of enormous Paiste cymbals from Italy, all of which sounded amazing. The set-up is for a taller player with a longer stretch and reach and the tuning was very odd to my ears. He told me afterwards that his recent album and tour with Eros Ramazotti involved precise tuning elements for each separate song, so he had to tune to a B flat across the rack toms and a concert C for the floor toms. He used triggers for the gigs but none with the clinic.

Man, that guy hits the drums so hard. I checked the heads on the kit after the show and every head on the rack had pits in them after he battered them during the performance. I don't envy his drum tech: he has to strip the entire kits after every show and put fresh heads on them, then use the tuning required for the samples and loops he uses for the gigs. Monster job of work. Definitely not for the faint-hearted.

Awesome show all the same, I learned a few new tricks and we had coffee afterwards and went through all the collectables in the store. It was a great night. Mowl got loads of freebies too: sticks, heads, a bag of tricks containing some spring-mounted cymbal holders that make you cymbals remain in perpetual motion after you hit them. With all three crash cymbals on the springs, they flop around for minutes after hitting them. I love them.

Aargh! Just got the news that my bid for one of these babies was outclassed and another buyer offered €10 more. I need the cradle of the drum as I have another awesome maple shell I could have used on it as well as the brass shell that's in it now. 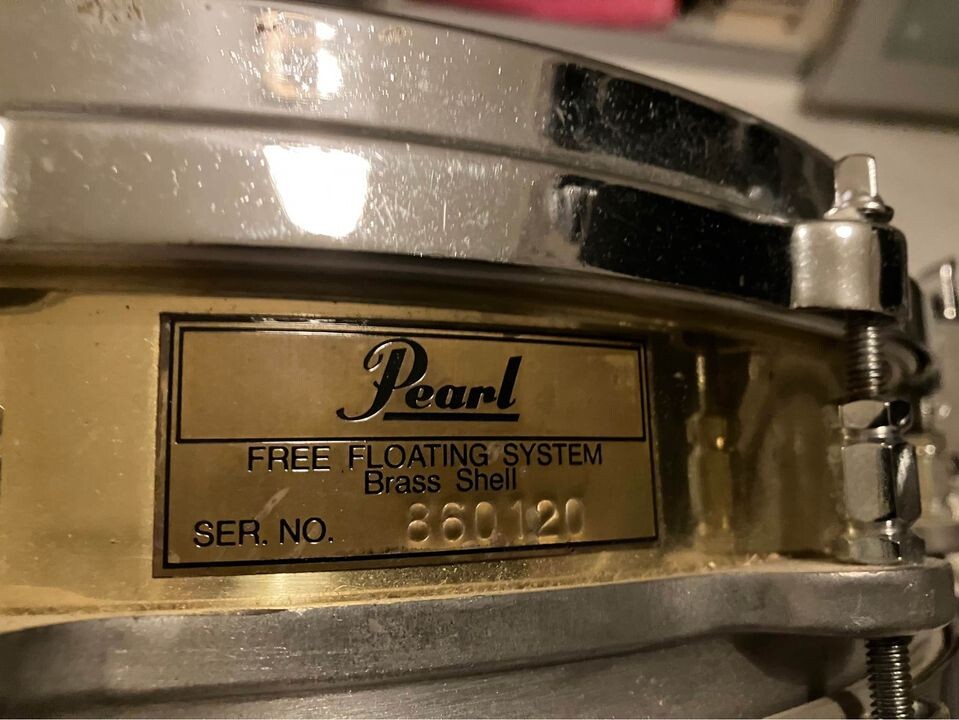 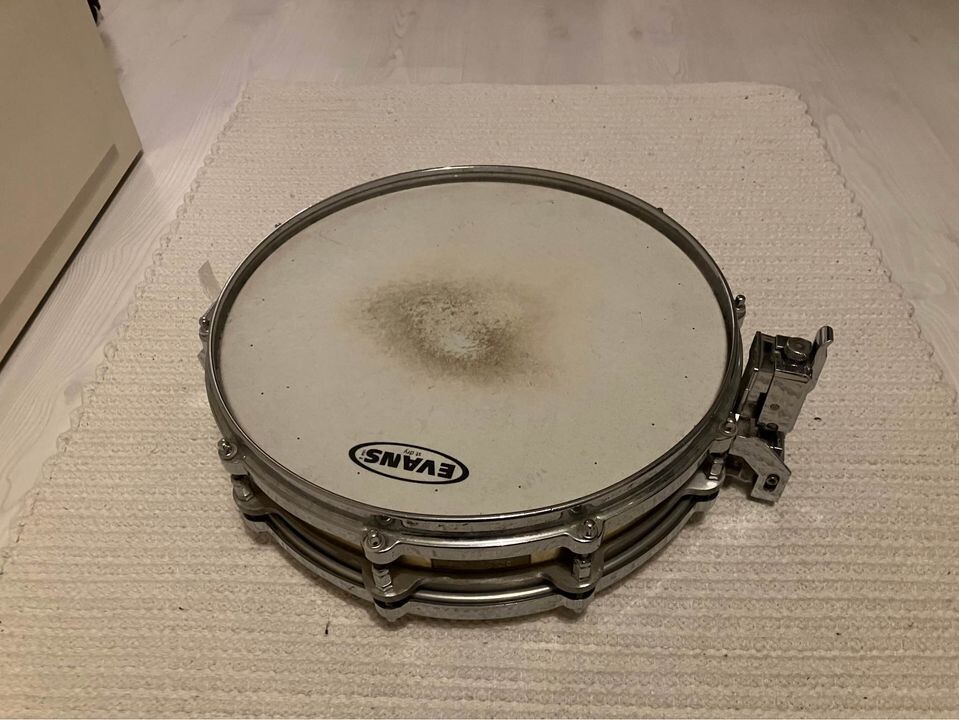 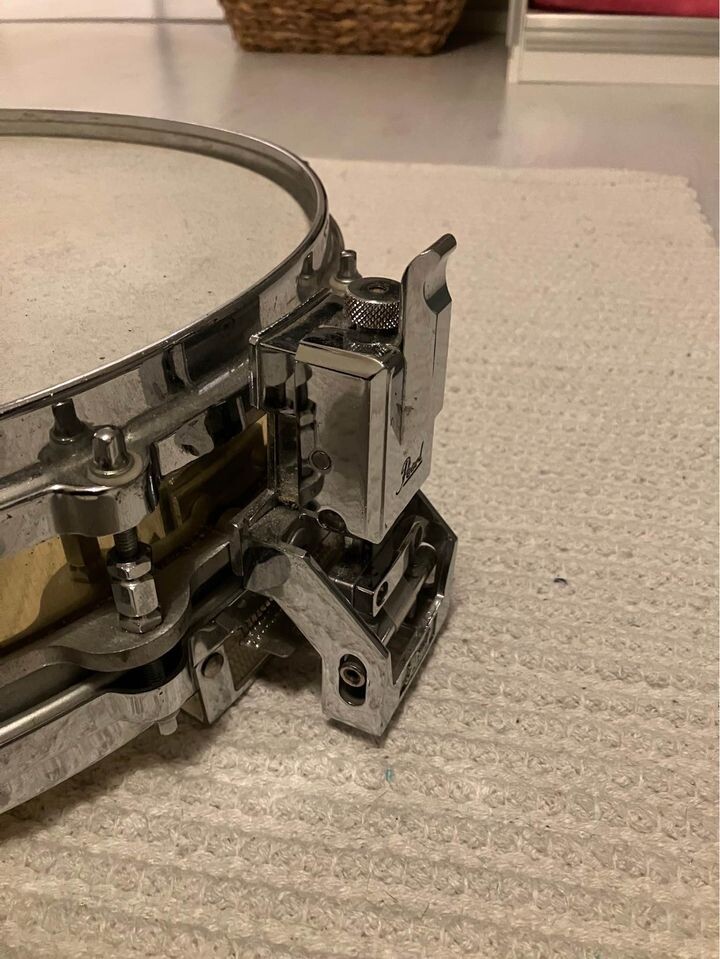 The seller was asking €140 for it, which is a steal. I presumed he was unaware of the true value of the drum but seems not. I'd have happily paid €200 for it as it's worth around €400/500 these days because it's from the original series. Which pisses me off because my main recording snare in the same drum except the five inch shell model.

Having the 5'' and the 2'' both in brass would have been heaven itself.

Ah, fuck it: I'm hurty all over - time for a long sauna after a tough work/study day.

Another week of this to go, then it's party time. I declined to take a wage each week's end and am happier to wait for the full pay-off next Friday/Saturday: so it's a hefty lump sum in cash, which rules.

Nah - not really. America is the most hated country on the planet these days, not that the inhabitants and mutants who live there know or care. If I had the choice between death or a life in America?

Kill me now, thanks.

First band I ever (got paid) to play(ed) in (I was fifteen and doing my Leaving Cert) used to play this one.

Which is the main reason I hate it now: but there are several other reasons.

Fuck America - and fuck Americans. The only smart and copped on ones I know all left to live in Europe.

Thrilled to see this useless fucking cunt going down in flames.

His next move ought to be suicide - that'll rock harder than anything I ever heard him 'sing'. 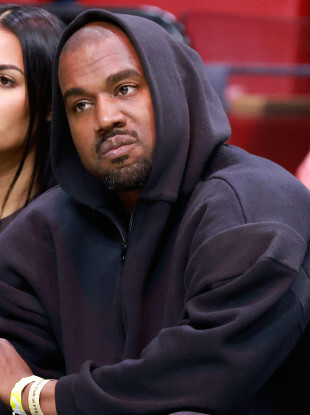 Did you watch the Lex Fridman (who's Jewish) interview?

Electricity said:
Did you watch the Lex Fridman (who's Jewish) interview?
Click to expand...

I have a life, Jambo.

You ought to try one yourself, you gullible twat.
E

I have a life, Jambo.

You ought to try one yourself, you gullible twat.
Click to expand...

Oh, nothing much - just the fact that I think you're a gobshite of exceptional circumstance.

An idiot, a white mutt covered with fleas.

Utterly useless to the world. 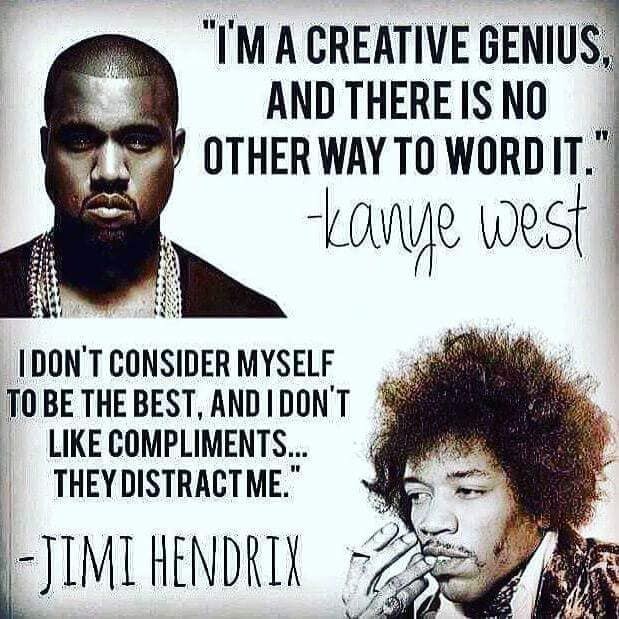 But only in the ego department.

Mowl said:
Oh, nothing much - just the fact that I think you're a gobshite of exceptional circumstance.

An idiot, a white mutt covered with fleas.

Utterly useless to the world.

But only in the ego department.

So you siding against Ye in this affair is based on a sort of jealousy?

Do you even know why he's been cancelled, has anyone told you?

When there is only one word in your dictionary👃 @EuropeanDefence5

Electricity said:
So you siding against Ye in this affair is based on a sort of jealousy?
Click to expand...

Jambo: go ask my arse, would you?


Electricity said:
Do you even know why he's been cancelled, has anyone told you?
Click to expand...

Do you wank off to your posters of him on the bedroom basement wall?

When there is only one word in your dictionary👃 @EuropeanDefence5

Yeah but do you know?

Electricity said:
Yeah but do you know?
Click to expand...

Fuck off back to sucking Val's balls while Youngdan wanks himself off in the corner.